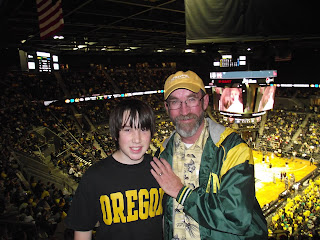 When you are young, you are iron clad. You feel you can do just about anything. You are indestructible. Then, as you grow, your body begins to tell you different. You begin to meet and greet inner demons.....inner fears. Things that cause your life to be different. Roadblocks of sorts.

Friday, at lunch, I began to think of how Jayden would probably love to go to the championship game in Eugene between the Oregon Ducks and the Creighton Blue Jays. I first called Carrie to ask her how she felt and then checked the Internet to see if tickets were available. What I found was that they had actually discounted the tickets to $10 each. It seemed that many did not realize that the game was in Eugene. That sealed my thoughts and when I picked up Jay at school, I asked him if he would like to go.

Excited, we both got our things ready for the quick trip. By four, we were on our way to Eugene. I had secured a room at the Days Inn which was right across the street from the new Matthew Knight Arena. An excited Jay said, "Wow, Papa, I would have never guessed that I would be going to a championship game today.".

Jay's dad is a flake and it is impressed on me to be the fatherly influence in his life. I enjoy so much my time with Jay and am so proud of the young man that I see him becoming. He is careful of the feelings of others and is a pure joy to hang out with. So, a good quantity of time is an easy thing for me. And as an old friend of mine once told me, you need quantity time to find quality time. That time when you are able to influence him the most. When the things that you tell him will enter in as something that he feels makes sense.

So, I hoped that this trip would find some of those quality times. We laughed and joked as we drove along while listening to my music on the stereo. "Papa, I sure wish I would have brought my ipod. Your music is weird.". Jay always has good questions when we take these trips or do things that are different from the norm and today was no exception. Things like what is the difference between creeks and rivers or why do they name towns by these weird names amongst others.

We arrived at the motel just 20 minutes before the game. As we parked and walked into the lobby, some guy zipped up to the door, jumping out of his running car, and beat us to the desk. Then he needed rates and made his decision on what room he wanted to rent before paying for it. By the time we left and headed towards the arena, it was now 10 minutes before the game. We had figured on stopping at Subway but felt we might be better set buying a hot dog at the Matt and after going in the door, went straight to Uncle Phil's snack bar. We found the smallest line and were right up front when the credit card machine went down. The man in front of us was trying to pay by card so actually tied up both of the registers as they struggled with his payment. All of the other lines flowed as we waited patiently. Getting our dogs, we wolfed them down as we walked briskly to our seats. We could hear the national anthem being sang as we walked in the back. 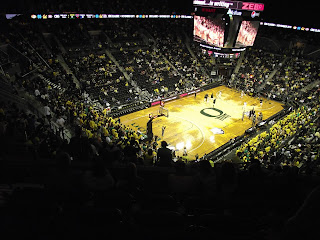 We sat down just in time for the teams to be announced. I don't think there are any bad seats in the Matt and ours was no exception there. We could see the court very good and could make out the various players quite easily. Jay showed me where pro Kyle Korver's brother was on the Creighton team and you make out the resemblance.

The game started and the Ducks took off from the blocks like a man running a sprint. They barely missed a shot while Creighton could not buy one and were soon handily in the lead. As in any well played game, however, the opposition soon settled down and by half time, the Ducks lead was only 1 and we realized that they were in for a fight in the second half. Jay seemed bummed as he told me that he does not like going to games that the Ducks lose.

In the second half, the visitors found their wind and soon had taken over just as the Ducks had done early in the first half. Jay slumped in his seat as the Blue Jays took a 8 point lead.

It was then that I hit met my first nemesis. For years, since shortly after my tour in the Navy, I have struggled with anxiety. I never know just when it will hit me but it is always when I am somewhere outside of my normal day. Sometimes certain things become a sort of trigger and one of my worst was on a flight between Redmond and Seattle a few years ago. A certain lady's perfume had although not the cause had aggravated the already attack and I became very ill. On the other side of Jay sat a lady with heavy perfume. Sometime during the second half, the fragrance hit me and I was back in that plane.

I struggled with my thoughts and kept telling myself why I was there. I was there for that young man next to me. This was his night and nothing was going to ruin it. I excused myself and went up to the men's room to try and recover. I could hear that roar of the crowd which showed me that the Ducks were coming back. I decided then and there that nothing was going to stand in the way of Jay's game. I arrived back at my seat to find two things. The lady was gone and the Ducks had tied the game.

The rest of the game was somewhat surreal as I struggled with my dilemma. I watched the visiting players as they shot their free throws while the crowd jumped and attempted to distract them. I knew that I must also focus just as the player was focused and while the crowd around me screamed, I could hear my breathing as I drew in through my nose and out my mouth. I became less aware of the crowd and more aware of my attempting to calm down. I watched Jay as he was so excited that the team looked like they could win. He was yelling along with the others and raising his arms while wiggling his fingers to help the Duck players make their free throws. Sweat poured down the side of my face as the little boy inside of me fought with the man who knew that he needed to remain in control. I wondered how I would be able to spend the night away from home but knew that driving back that night was no option. This was Jay's adventure.

I began to calm down just as the game was coming to a close with the score tied. I remembered thinking, I hoped someone would score so that we would not go into overtime. It looked as if that someone was Creighton as they took a time out with 25 seconds remaining. But, when they passed the ball in, the player did not realize that he was close to the half court line and ended up stepping across it and turning the ball back to the Ducks. The Ducks scored with 2 seconds left and Creighton with no time outs leaving them to heave it from the back court. 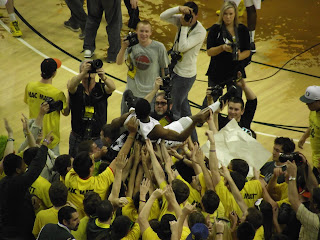 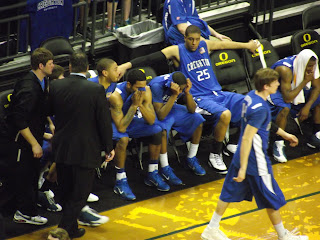 The Ducks had won the game and the students poured out on the floor. I know that Jay would have loved to have gone out with them but I just could not do it. Fortunately, he never asked and we watched the mayhem from our perch. We stayed and watched the joyous Ducks as they received their new trophy and then headed back to our room. 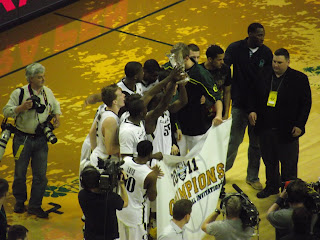 The cold air outside seemed to bring me back totally to my senses and I was soon joking with Jay as we walked to our room. We got ready for bed and watched some funny videos on TV before calling it a night.

I slept well for four to five hours. Then met my second Nemesis. Sleeplessness. At least it did not come with anxiety as I knew what I was doing battle with. I had forgotten my book and my laptop, two of the items used to combat this from time to time. I just lay there for a half hour before turning on the TV with the mute button on. I searched the channels looking for something to watch that did not need sound. I finally ran across an MTV show that I think they call Jackass. I had seen parts before and I watched as men did stupid things to themselves that needed no sound to understand. Then the show got rank and I could not deal with it anymore. They were giving a guy a beer enema and that was enough. Disgusted, I turned off the set and went to the bathroom. I drew myself a shower, letting the hot water pour over my head. I stopped up the tub and when the water level rose, just sat and soaked for a while. This proved to be the thing that helped me get back to sleep.

Jay and I woke up at 6, jumped in the car, and drove back to Bend. As soon as I arrived, I was summoned to the diner where I ended up working until mid afternoon. The day was very busy but I was back in control. Back in my world.

Jay kept his tickets, his game program, and the next mornings sports page. Memoirs of a fun trip and adventure with is grandfather. One that I hope he will remember for a long time. I know I will.