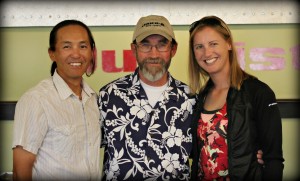 I heard they were  coming a couple of weeks ago and thought it was pretty cool that they were stopping by.  The Lions Club has their meeting in our back room and has some pretty good speakers from time to time.
Then, Monday, Casey asked me if I had read the newspaper.  I told him no and asked why.  He asked if I knew the blind bikers were coming by and I told him that I did. "Do we have enough room?", he asked.  "Sure, why not?".  He then told me that it was on the front page of the newspaper and that the public was invited.
I figured that it might get a little interesting but who really reads the paper anymore?  I stopped reading it when they didn't do anything about John Anderson but that is a whole other story.  I only read it if there is something of great interest that is local or for local sports.
Then, it came out on TV and by Thursday, I was wondering what I should do. Initially, I figured that I would just let them fill up the room as best that they could.  Thursday evening, a man called and asked if we were making reservations.  The Lions Club had still not talked to me about the meeting.  And then, I found out that they had invited the other clubs in the area along with the public.  I went to bed on Thursday wondering how Friday was going to pan out.
I awoke in the morning with the solution in my head.  It often goes that way. We would turn over the main floor to the Lions Club.  That was the only way that we were going to be able to handle the problem.
At 11, we put up signs and began to take the regular customers into the back room and set up the main floor for the meeting.  We already had the sound system for the Band of Brothers and I hooked it up.  By 11:30, the back room was full and only a few people had came into the main floor.  A group of four came in and left when they did not want to wait for a table.  I tried to talk them into coming into the Lions Club room but they wanted no part of it.  A two top came in close afterwards.  I found them a place but the back room was so full that they said they felt claustrophobic and they left also.  I got real frustrated and began to doubt my earlier decision.  There were only 20 or so in the main room at the time.
"Have I made a mistake?", I thought.  My answer came quickly.  A man stopped me at the door.  He was leaving and he wanted to say something to me.  "I love your food.", he said, "But there are a lot of good food places in Bend.  I want you to know why I come here. I love what you do.  Just like what you are doing in the front room right now.  I eat here because I want to honor you......to honor your heart.".  In that instant, my question had been answered.  No matter what was to happen, I was doing the right thing.
Shortly, the front room began to fill.  Many of them were new faces that I had not seen before.  The back room was rolling well and we didn't lose any more customers there and shortly, the meeting started up front and the two bikers, Christi Bruchok and Tauru Chaw began their talk.  As I watched them, I was taken by how much Christi reminded me of Rachel Scedoris.  They have their blindness in common but their mannerisms seemed so much alike. 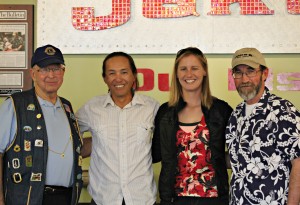 The two were very engaging and entertained and enlightened the group well, answering any question that was given them.  The session lasted around an hour or so and right afterward, we took a few pictures before they left.  Judy promised to send them copies so that they could post them on their website, http://twoblindtoride.org/ . 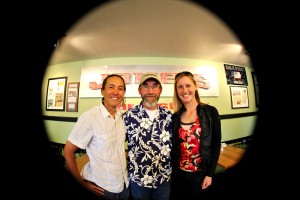 All in all, it turned out to be a very good day and two things were once again validated.  My early morning thoughts are my best thoughts. And, every time that I begin to question whether it is the right thing to do, someone comes along and validates it.  When the man who talked to me left, he said, "God bless you.".  I said, "He does.....every day.".  Meeting these two incredible people was truly mine for today.