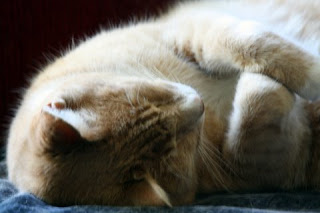 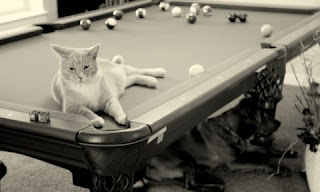 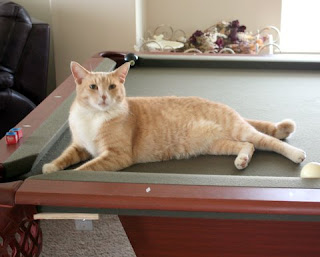 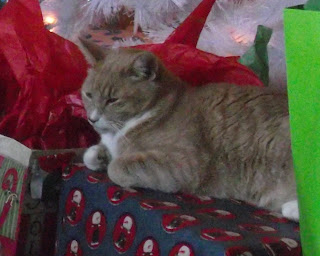 He showed up on our door step around 10 years or so ago. He would cry like he wanted us to let him in and I would chase him away. He was dirty looking with his tail bent at the end as if it had been broken at one time or another.

Now we had taken in strays a time or two but always young strays. Judy agreed that this dirty mangy crooked tailed feline was better off outside. I warned her not to feed him but....well, Judy could just not do that one. We decided that we had ourselves an 'outside' cat. Judy said, "There is no way that I am letting this filthy cat inside.".

I was not surprised a month or so later, to walk into my bedroom and find him laying in the middle of our bed. I picked him up and deposited him outside the door. The next day, he was back but before I could extract him, Judy informed me that Maxwell was allowed inside now......he had a name making him an official member of the clan.

It seemed that Trinity had taken a liking to the persistent cat and had gone out and purchased some dry cat cleaner and had given him a bath of sorts.

To save our furniture, I had Max declawed in the front, leaving his back claws as he would never try to sharpen them on the couch. We also had him fixed. Normally, these types of things would make a cat more domestic.....more inside. But, not Max. Even without front claws he showed that he could easily leap up and over six foot fences using his back claws. He also remained just as skilled at mousing. His catches are always laid out just outside the door as tokens of his love for us. It is my job to dispose of these 'presents' and on many a summer morn have found as many as two laying side by side beyond the entrance.

He also never lost a cat fight, learning to use his back claws for offensive strikes. He would often come in with battle scars but with a stern triumphant look on his face. I once found him trapping a cat much larger than him in the corner of our yard. This was his territory and the other cat needed to be taught that lesson.

Max is just as persistent in his being lovable. In the morning, when he wants to be petted, he will crawl up next to you and stare at you. He has learned that if he utters a 'meow', he gets tossed so he just stares. Then he edges closer and closer. Soon, his head is close to your hand. If the result is not what he wants, he is soon nudging underneath your hand, sliding his head into a position for you to stroke it. "I am Max. You belong to me and I want to be petted now.".

Our grandson Jayden has an allergy to cats. While it is not a big one, it sometimes causes him some grief. But, to him, Max can do no wrong and he has decided that Max is his cat.

A war started up between us a few months back. With my new diet, I have been able to sleep better so when Max informed me one night that he wanted to go outside, I ignored him. His meows got larger until I picked him up and gave him a toss out the door.

A few days later, the same scenario occurred. This time, I was more persistent and slapped his butt a bit as he was extracted. With a large yowl, he turned and glared at me as if to say, "This is not over.".

At around the same time on many nights (around 3AM), Max would come into the room and let us know he was there. If we ignored him, the sounds became louder. I would swing my foot out of the bed and he would yell and run, normally not coming back. I felt that I was beginning to win the battles.

Tonight, he came into the room and woke us both out of sound sleeps. I had been up late watching a movie and when I could not sleep, had soaked in the hot tub for a bit, getting to sleep around 1:30. So, at 3, Max was not accepted well. Judy tried shushing him but Max wanted our undivided attention.

So, I swung my foot out and he, as expected, ran out the door with a loud and demonstrative "Meow". Ten minutes later, he was back.

Walking back and forth in front of the bed, his voice became louder until I leapt out of bed, catching him off guard as he scurried away and down the stairs. I climbed back into bed thinking that maybe I might have won this skirmish but picking up one of my slippers for good measure.

Sure enough, minutes later, he walked proudly in the door and announced himself. I sat up quickly, took aim, and flung the shoe just by his head. With a jump and a yowl, he sprinted out and down the stairs.

For measure, I picked up the other slipper. I was sure he would be back so I sat up in the bed and waited. 4PM came and no Max. I got out of bed and looked down the stairs.

Confident of my victory, I placed the slippers in their place and laid my head back down on the pillow triumphantly. But now, I was wide awake. I tossed and turned but to no avail. So, now I am up with slippers on my feet to tell you this tale.

It is now nearly 5:30. In retrospect, it might have been wiser to just have let him out. But here I type with the night nearly over and only a slight 1 1/2 hours of rest. Tonight, I have won the battle. But, I fear, Max may have won the war.