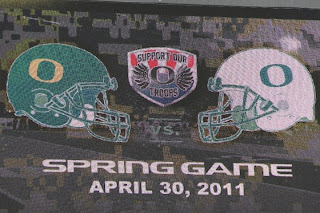 I got up early on Saturday and drove to the diner for breakfast. Business was brisk and I ended up helping out a bit before taking off. I had my normal Hawaiian shirt on but this one was a bit different. It was my Oregon Ducks shirt. I was off with Carrie and Jay to the annual Oregon Duck Spring game.

Our drive over reminded me of how it is in the fall, with many others around us, decked out in green and gold with their flags flying. As we drove into the valley, we enjoyed the spring flowers and blooming trees. We were driving into Springfield, when Carrie laughed heartily. She told me of a house with a very junky, run down front yard. Right in the middle of the yard was a sign advertising their landscaping business.

The closer we got to the stadium, the busier the traffic got. I pulled off of the freeway and most all of the cars were in the left lane. I looked ahead at the light and the signs seem to say that both lanes could turn left so I crept up. I began my turn along with others to only realize that the sign was really saying that the left lane could turn two ways and my lane was suppose to go straight. I was not well liked when I crept over and pushed my way in. I said, 'sorry, but I am sure I was not well received.

As we crept down MLK Blvd, we listened to the announcer on the radio talk of our backed up traffic and I called Judy on the blue tooth to let her know we had arrived. I was watching the signs very close and the sign ahead said to turn right so I did. I found myself on a dead in road and , frustrated, I turned around and went back to the MLK. I then found myself stuck at a stop sign while the others who had realized that the sign was meant for the next block kept me blocked in my side road. I mused how that if I was in Bend, people would be letting me out. Finally, someone probably from our great interior, waved me on and I made the proper turn towards the parking lot only to find the lot was full. We turned off on a side street and found another group parking area and walked into the packed stadium area.

I had set up with a food broker to join him in the parking lot. He said just look for his car and that he would be by the main entrance. We walked around the lot for a while before giving up and getting in line to go in. We positioned ourselves close to one of the gates and made our plans in case one of us got separated. We would get as close to the field and the 50 as possible. As the gates opened, Carrie and Jay sprinted up the hill while I jogged behind trying to keep them in my sights. I likened it to the 'Amazing Race' that we all enjoy watching on TV. I was the old man who could not keep up.

But, as we got to the top of the hill, amazingly, I was right behind them and actually passed up Carrie keeping Jay in my sights. While most were trying for the 50, we ran over to the next set of stairs and found us three seats , second row, right on the 45. I plopped into my chair and waited for my leg to stop cramping from the tromp down the stair case when Jay said that he was hungry. 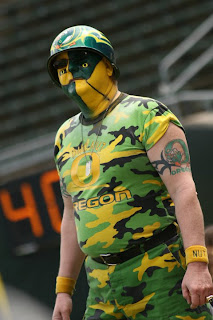 I thought it best to go get some food while others were finding them seats and we would be at the front of the line so we headed back up to the concession stands. We quickly found out what it was like to swim up stream, fighting the traffic all the way back up those steps. We stayed to the right but that did not matter, they had both lanes. Then after getting to the top, we crept along the wall through the masses that were coming in the side tunnel. We arrived at that very open stand and made our order. Four hot dogs, one popcorn, one small soda, and two waters. $32!! I pulled out my credit card only to be told that they only accepted cash. So, I scrounged around in my wallet and was relieved to find enough to pay the bill and we headed back to our seats. 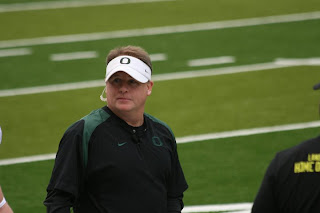 And what great seats they were. We could see the whole field well from there and were right behind the white teams bench. We watched as the team came on the field and did their warm ups and referenced our program to see who was who. That really wasn't needed, however, as the two older ladies behind us knew all of the players by sight and pointed out many of them two us. They knew the team and game very well and did a good job of correcting the refs throughout it. "That was pass interference!". But, what made me smile was when one of them got a phone call from her husband. You see, they were at the game and their husbands stayed home. I chuckled to myself as the one lady turned to the other and said, "Bill wants to know if you guys want to come over to our place for a BBQ tonight". It was like the female version of a guy thing. 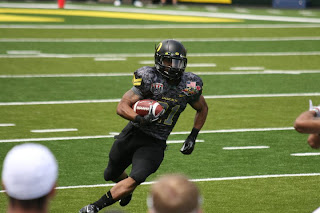 For the next two hours, we sat with 43,000 others and watched our beloved ducks scrimmage against each other in their special camo outfits. They dedicate their spring game to the troops and many of them were there and actually ran out on the field with the team. The game was fun to watch as we were so close that we could see the sweat on their brows, the expressions on their faces, and watched LeMichael James pull off one of his patented touch down runs right in front of us (That guy is fast!). 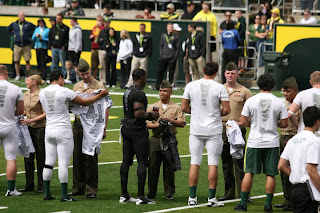 After the game was over, the troops lined up on one side of the field while the team lined up on the other. They met in the middle of the field and the team members gave their jerseys to the service man who in turn gave the player a commemorative coin. We were all blocked off from going down to the field until the players were all out of harms way and off the field. 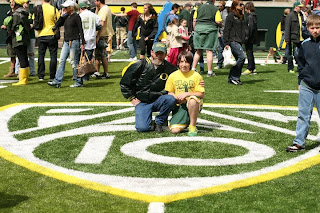 The three of us then walked out on the field and took pictures from the various parts making sure that we got one at the Pac 10 logo which is soon to change to Pac 12. 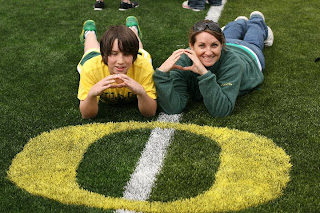 We then walked out the tunnel where the team comes in from as it was the easiest way to exit the stadium. Jay and I made sure we hit the board above the entrance that all of the players hit on the way in that says, 'Win the Day'. 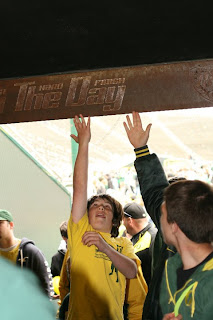 As we walked down the tunnel, a man and his kids nearly knocked me over trying to get by. I wondered what their rush was when I spied him right in front of me. We had been walking out, right behind Phil Knight. We waited while the family who had shoved me over got his autograph on their football and then I asked Phil if he would allow us to take a picture with him . 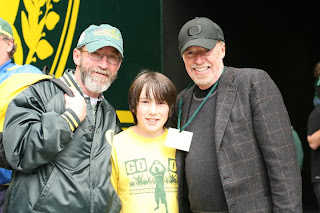 He was such a nice man. He smiled and said, "Of course I will.". I shook his hand and thanked him and watched as he walked away through the crowd. Some realizing and getting pictures while others asking for his autograph. You could see that he was headed for the locker room and we headed around the building and the store so that Jay could get a souvenir at the store.

We then walked back to the car to see the biggest challenge of the day. Getting out of the parking lot. Everyone was so patient and all seemed to take their turns back and forth with only one person trying to keep his car up on the bumper in front of him so that the car in front of us could not come in. He reluctantly gave way, however, after I think his wife must have chewed him out or something.

The outgoing traffic seemed just as jammed as we headed out the freeway towards Springfield and the Santiam pass. I found myself in the fast lane as what I thought was the stop light for the turn. I needed to get over to the right lane but was stuck behind a slower car. I crept up a bit, trying to make my way over which just made him go slower. I realized that we were not up to the light just yet and backed off but only to find him swerve over into the other lane, slow down even more, and lower his window. As I drove by he put out his arm and told me that I was number 1. Carrie said, "I don't think that guy likes you much.".

We stopped at Albertsons for a quick bite and then home. A bored Jay had me count down the miles as we got closer to Bend. "How many more miles, Papa". "I am not sure, son". "You should always know. You are the driver.", he quipped.

Arriving home, I dropped off the kids and headed to the diner. They had just finished a rush and I helped them get set up as more customers streamed in the door. The next two hours were spent busing and setting tables, greeting customers, running the till, sorting out food, and trying to eat my own supper along the way. As one customer left, they told me that I should go eat my food before it got too cold. "A good manager never eats hot food.", I joked.

I finally sat down and ate while the room seem to settle around 8 or so. The cook came out and sat with me for a second while I downed my prime rib tacos that I had talked him into making for me. Three soft corn tortillas, topped with sliced prime, lettuce, and cheese. One customer stopped by and raved about the prime. He said that he had taken a picture of it and sent it to his dad who was very jealous.

The cook asked me how I enjoyed my vacation. "My vacation?", I asked. He said, "Yes, your trip to the game. You work every day so it was kind of like a vacation, wasn't it?". I smiled at his statement especially since I had started and finished off my day there at the diner.

I headed home and was just coming in the door when Carrie called me on the phone. Somehow, her keys had fallen out on the floor of the car on the way home. So, I did my fatherly duty and drove back over to her house with the keys arriving back home after 9 and pulling myself into bed for the night.

A great trip with my daughter and grandson, A fun game, and a memorable experience.