Mongo has been kidnapped 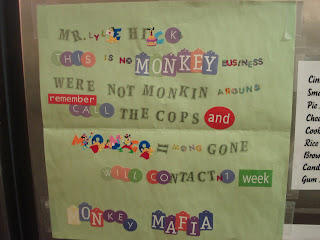 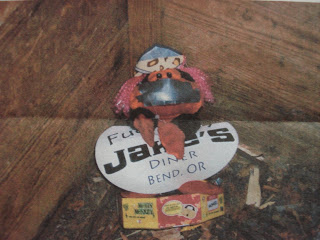 We had quite a few cute stuffed animals on our counter this Christmas season. Most of them were brought to us by customers. It was fun watching the kids (both old and young) as they would push the buttons that would make the animals entertain them.

On a stop to Grocery Outlet, I found Mongo. The happy little monkey would spin around while the song, "you spin me around" played. He became a hit to many of the kids and so I left him on the counter after I had taken the rest off.

I did not notice when he went missing but last evening, someone brought in the picture and the note that showed that he had been kidnapped. Originally, I felt that it was my buddy, Frank, who does this kind of thing all of the time. But, he swears that it was not him and he doesn't lie to me so......

It will be interesting to see what the next note brings. Already, many of the crew and customers have their ideas on who took Mongo and what they will do to him. But just look at his pleading eyes and his hands in prayer for someone to save him. I think he is a wood box of some type. Maybe a cabin in the woods. Hmmmmmm