My buddy, Frank, tells me that I am a man with many stories. I have always hoped that one day when I am older, my grand kids will sit around me and I can tell them tales of when and where.  For that to happen, you must live an interesting life.....and so far, mine has been just that from time to time. 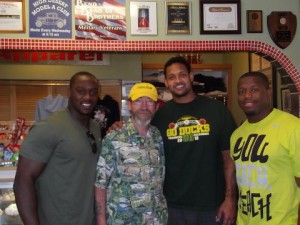 A couple of weeks back, I fielded a phone call in the middle of the day from a young lady named Maddie.  She asked to reserve a place on a specific Saturday morning for a wedding party.  "I have been bragging about your place for quite a while and I want to bring some special people in to see it on a special day.", she said.  "What kind of people?", I asked.  "Some NFL players.", came the reply.
I asked who and I must admit that after she said Donte Rosario and Jonathan Stewart, I did not hear that rest of the names.  These two famous ex-Duck names had tweaked my interest and in my mind, I was trying to shuffle the floor around on a busy Saturday in the future to accommodate them.  "I will have a place for you.", I promised her.
I already had two groups scheduled that morning and first thought of putting them out on the deck but a check of advanced weather did not look promising.  I checked with one of the groups who meet every Saturday and found that they would be away that week, so the foundation was laid to make this event happen.
That Saturday morning, I called in extra help and blocked off Casey's section for the wedding party.  Knowing that he was going to serve some Duck alumni, Casey proudly wore his Oregon State hat as we readied for the party who was suppose to arrive after 8.  Around 8:30, the girls of the wedding party arrived.  The pretty girls walked across the floor and caught the eyes of most of our male employees and customers.  I stopped and talked with Maddie who told me that the boys would be along shortly.  She said that one of the NFL players had stayed behind but three would be there.  I asked her who was getting married and she beamed as she told me that she was marrying Dante.  She told me that he third NFL player was a man named Jon Beason.
I knew what Dante and Jonathan looked like already being a Duck fan, so I did a search on my computer of Jon only to find a mug shot of him a few years ago after he had punched a guys nose in in Atlanta after a come from behind win.  After that, I expected to meet a huge, tough, and mean player.
In fact, I met a very friendly and engaging young man that was not much taller than me.  Now he did have big arms and abs but he certainly did not come off as being mean.  Jon, Dante, and Jonathan came in with the rest of the boys and all sat at different tables, Dante close to his bride to be, Jonathan with the main group of guys, and Jon with the larger group of girls.
Dante introduced me to the guys in the group and I attempted to grasp for names that I remembered but did get distracted with he introduced me to Brady Leif.....you see, as a Charger fan, we all remember his infamous brother, Ryan who is considered the worst bomb of a number one pick ever.  Other than his brother, most of the guys seemed to be on one of the Duck teams that Dante and Jonathan had been on.  Both Dante and Jonathan had been drafted by the Carolina Panthers and that is where they met Jon who played at the University of Miami.
The three NFL players followed me over to the counter where we took a quick picture.  I then called Trin and her friend, Ashley over for one more quick shot and then ducked into my office as the boys returned to their party. 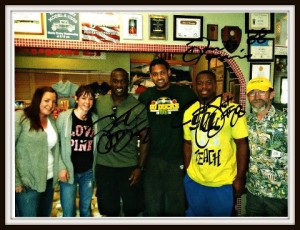 I quickly printed the two pictures and brought mine over to have them sign.  I then gave two copies of the other picture to the girls and told them that they needed to do the same.  Two embarrassed and begging girls talked me into getting their picture signed for them.  I took the clip board and made the rounds again.  As Jonathan signed the copies, I noticed that his food had already been delivered and that I had just made my first gaff....asking him to sign the copies while he was eating.  I don't think that impressed him and I kicked myself for the error.  I teased Jon about his choice of seats as he was on the table with most of the brides party.  "I do know how to pick my spots!", came the smiling reply.
Attempting to let them enjoy their 'Jake's' experience, I went about my work while they ate and poured some coffee to visit with our other customers on the busy Saturday floor.  I was happy to note that most seemed oblivious to the larger bodies on the other side of the room.
My friend, Sam and his son, Jake walked in and I asked Jake if he would like to meet the guys.  The offer brought a huge grin to his face and I led him over and introduced him to Dante and Jonathan.  They both engaged him and I slipped away to let him have his time.  An excited Jake soon joined me and his father back at the door.  "Dante was my favorite Duck ever!", explained Jake.  "Did you tell him that?", I asked.  "No, I was too nervous.", came the reply.
So, I walked over and told Dante the story.  "Lets take a picture with him", Dante offered.  I looked over to see that the boy and his father had left so we decided to take one of the original pictures and have them autograph them to Jake.  As I had Jonathan sign the last print, I made my second gaff.  Meaning to be funny, I told Jonathan what Casey had said when I told him that he would be serving him. A teasing Casey had said, "I don't want to serve Jonathan as he made me lose my fantasy championship a few years back....he caused me to lose twenty bucks.".  A not so happy NFL player told me what he thought of fantasy football and how it has hurt so many players.  Stating that Casey was only teasing did not seem to soften it that much so....I just let it go.
As many things do go on busy days, the party came and went quickly as the girls left first and the guys made their way out the door, the three NFL players, made it a point to shake my hand and thank me for the time.
I thanked them all for coming in and watched as the group left.  A couple of more pictures for the wall and memories for my future stories for my grandchildren.