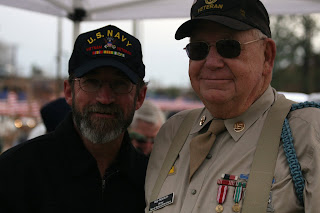 Sigh....As I stood in the crowd at my old friend, Earl Depue's funeral on Monday, I thought of that old adage that is often said of how things like this happen in threes. I began to wonder if that was true, who might the third be. It took less than a day to find out.

I was called by my buddy, Zin, yesterday with the third and it hit hard. His name was Ray Harmon. Zin and I had just visited him the week before. He was in the senior home off of Division street. We were directed to Ray in room 1. As Zin and I walked in, Ray was laying back on his bed. He didn't look to bad except that he had lost a bit of weight. When he talked, however, he still had that boom in his voice. He was one of those men who when he talked the bass in his voice amplified making his presence more commanding.

Zin: Hey Ray, my man, what are you doing.

Ray (smiling as he sees his two friends): Hell, I don't know.

Me: Don't you want to be here, buddy? (Stupid question)

He went on to explain that they had sent him here since they felt they could not help him any further in the hospital but felt he still needed supervision. We chatted and joked with our dear friend and shook his hand as we left with the knowledge that he was truly missed at the Band of Brothers meetings.

I am not sure if I recall our first meetings. I know that I took an immediate liking to him as you can tell genuine and Ray was surely that. He always had a smile and a shake from that huge hand. He was easily a favorite of both Judy and I.

The longest conversation that I recall having with him was in the clinic as Judy was in the doctors office while Ray and I sat in the waiting room. He was there because every time he stood, he got dizzy. This never stopped and only got worse. Whatever the cause was probably what finally took him.

He was one of those guys who you just felt at ease with, who was easy to talk to, and I can still hear that booming bass voice resonating in my ears:

Ray has gone home ...and I really miss him.