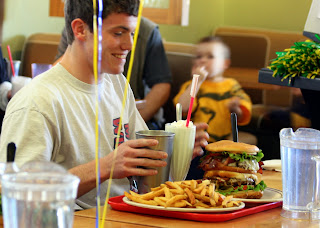 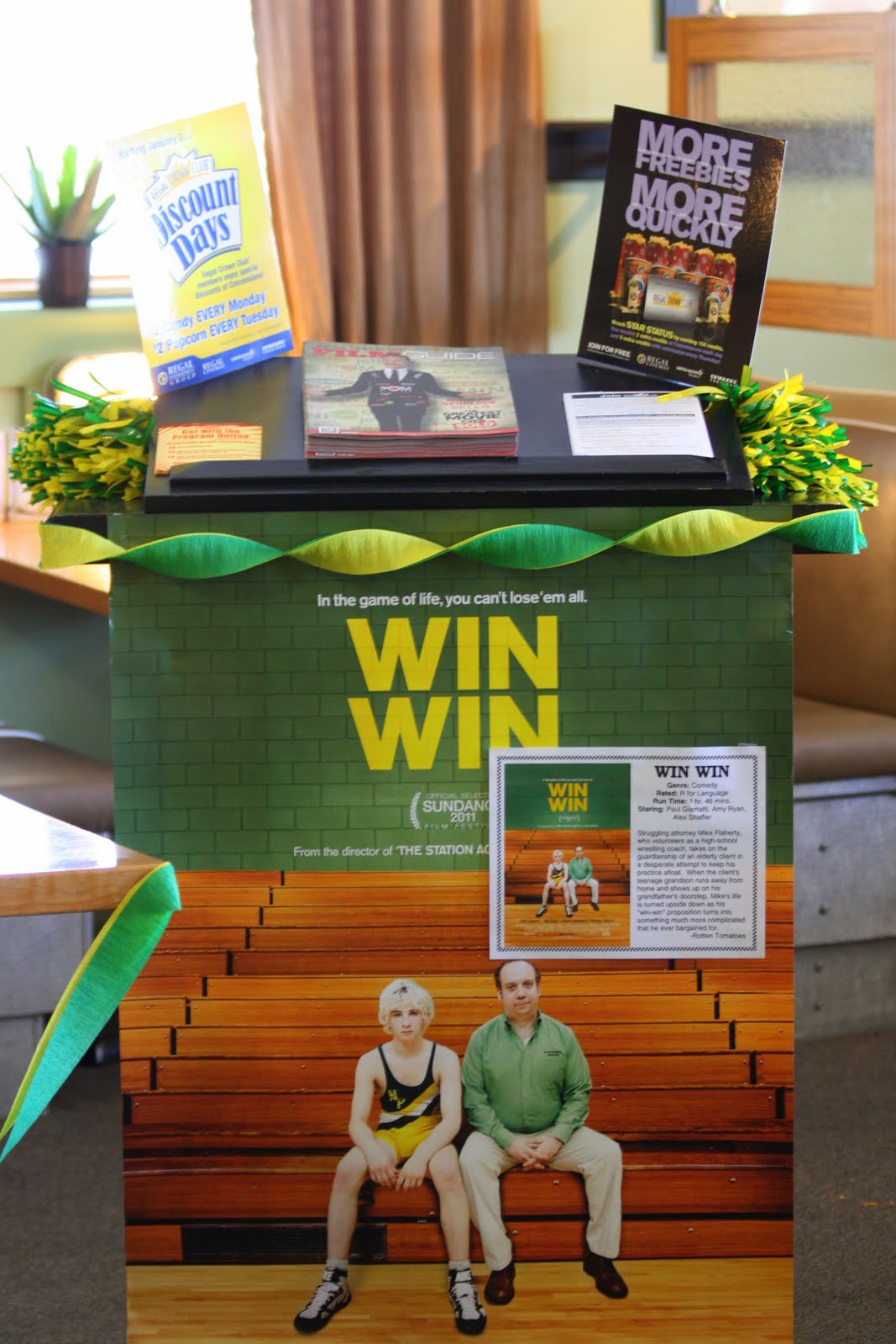 I have been thinking of this for quite some time. It actually came to me in the middle of the night. Take one Big Bad Jake, flip it upside down and place another on top. A sort of 'Big Mac' looking burger except on steroids. 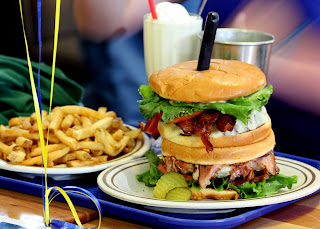 I originally thought of having a representative from each of the schools football teams but was asked by Regal Six Cinemas if I would consider using wrestlers to coincide with a high school wrestling movie that they were promoting and thus the challenge was set.

Trinity set up the room with some of the girls from the theater and the contestants started arriving shortly before the 3:30 start. We had color coordinated balloons and a long table set up with plenty of room for each contestant. Buckets were placed on either side of every chair for the obvious reasons.

As we waited for the burgers, I went over the rules with the contestants. I gave them 45 minutes to eat the burger, fries, and one of our milkshakes of their choosing. The boys all looked eager to start. Regal Cinemas had come up with a prize package and the winning team was to receive the money from the silent auction that they had put on there.

We brought the burgers out on school color trays and the contestants sat staring at their tasks. I looked at Mt View and asked, "Are you ready?". A nod was the answer. The same came from Bend and Summit so I dropped my hand and said "Go!".

Trinity had started the timer and handed it to me as I walked behind the counter. My buddy, Frank, was there and joked with me. "Go, is that all you have? Go?", he chided. I realized two things. He was right. I was so focused on the event and everything around it that my mind was thinking in black and white terms. Also, I had one of the most creative minds around right there in front of me with Frank, who had been a youth pastor for many years. I decided right then and there to turn that part over to him as I handed him the timer.Frank went into 'Frank' mode as he led the charge at the 15 and 30 minute mark and then began the five minute count downs, exciting the crowd with his enthusiasm. I was glad that he took over as I had two minor problems crop up that took me away from the craziness of the event.

All of the contestants seemed to take on differing strategies as they sought to conquer as much of the food on their trays as possible. Mt View tackled the meat first, Summit tried using the milkshake to sort of lubricate, and Bend just attacked. For most of the challenge, Summit seemed to be the one that had things well in hand. It looked as if they would pull away and win the challenge. Then, with 15 minutes left, the Summit wrestler seemed to hit a wall. 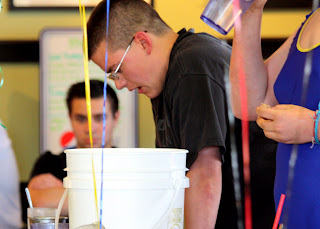 Bend saw this and chided the Summit wrestler by placing the bucket up on the table close to his tray. The slowing down of the Summit wrestler also seemed to bring a second wind on to Bend. He began to dig into is burger with a new fervor. It was evident that even though Mt View seemed to be having fun, he was not going to be up for this daunting task.

With five minutes remaining, I had my scales in hand to weigh the different trays to see who had eaten the most. 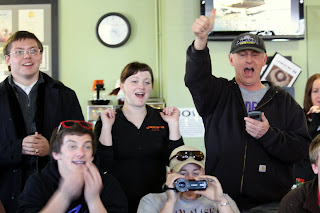 Frank egged on the crowd and pushed the contestants with his enthusiastic count down. And with no time on the clock, the wrestlers were allowed to finish only what was in their mouths. Bend's strategy was to put as much in his mouth as possible as the final seconds were sounded. 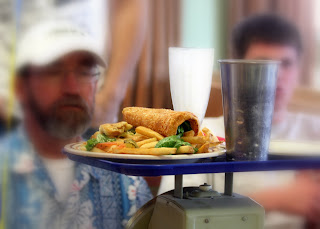 The plates were weighed with Mt View starting out at 8lbs. I wished that I had weighed them before they went out but that was too late. The dishes and milk shake glasses had certain heaviness that needed to be taken into account. I could tell Bend's tray was much lighter and sure enough, it came to around 5 3/4 lbs. I then weighed Summit and found the exact same weight. 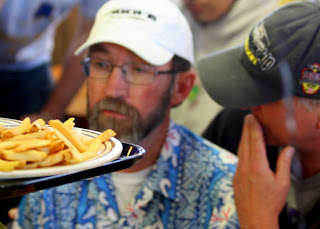 I brought Frank over to look and also to confer on how we would handle a tie. We both agreed that their needed to be a winner when someone noticed a difference. Bend's tray still had the milkshake spoon while Summit's was missing. This brought their tray to just a hair below the 3/4 lb line and thus was their slim margin of victory.

I talked to each of the contestants afterwards, congratulating them and thanking them for their attempts. Mt View said that he had not been feeling well all day, Summit told me that he could not talk (He looked a bit green in the gills), and Bend grinned from ear to ear.

Judy took a picture of me with the newly crowned winner. As the kids left, they all said that we should make this a yearly event. 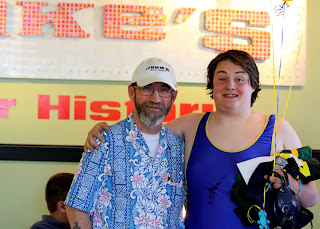 If I do, I know that I have learned a few lessons from the first. Weigh the trays before to see just how much was eaten. Hire Frank or some other quick thinking fun mind to MC the event. Give ourselves more time to build up the event in the schools and community (maybe even set up some other ways to generate funds for their programs). But, most of all, learn the names of the various contestants. I feel bad that I can only name them by their schools.