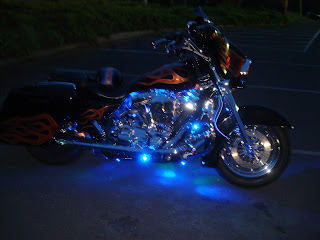 You could hear them from quite some distance away. Deep Low Rolling Thunder. The Black Sheep Christian Bikers clubs from all around were rolling into Jake's for a Pie Run.

We normally close at Nine PM but as prearranged, we stayed open for a dessert run for the club. There was suppose to be around seventy five or so show up for the event and we were told that they would come in staggered groups. Since we had never done anything like this, we knew that it might get interesting.

I was out in the parking lot, getting some shots when I spied Judy's car driving up. She had showed up to help. Jim had already planned to bring out the pies onto the counter so that we could cut and serve the pies while the girls took the order. I had told Ricci that she might want to have a third waitress on but she felt that since they were to come in spurts, that her and Kara could handle it.

I ran into KC Caldwell from the twins in the lot. She and her family had come in earlier that evening to support us after the break in. I am always at awe and very appreciative of the many people in the community that have done just that. I have been stopped quite often in the past few days, asked how things are going since the break in, and told that they are there specifically to support us. Many have voiced their anger and told me that when someone does something to Jake's it feels like they have done something to their family.

"Hey, it's Ten Dollar Dave!", shouted KC. A big bearded burly biker turned his head and smiled. I am soon introduced to a legend in their group. I have not asked what the 'ten dollar' is for but I am sure there is quite some story that goes along. KC had a local in the Redmond area and had ran across some problems with a 'local' man there. Ten Dollar and his buddies found out and ran security for the rest of her show. 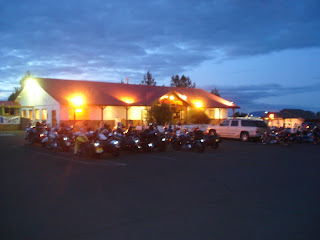 As I took pictures, a couple of ladies drove by and stopped. "Hey, this is so cool.", they said. I smiled and waved at the possible biker mama wanna be ladies as they drove by slowly scanning all of the bikes that now almost completely filled the lot. 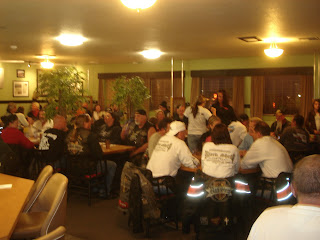 I began to notice that the stagger had become a spurt with all of the bikes coming in pretty much together so I came back in the diner barking orders to the cashier to call the third wait staff in. He was already on the phone. Jim had the counter filled with pies and cakes and the orders were already coming in. Judy, Jim, and I cut the pies and served while Chris, the cashier, put the ice cream on the specified orders. One problem we found right away was the shortness of pie cutters. Our pies are cut in fives instead of sixes like most restaurants. Years ago, I had special made pie cutters made to handle that problem. We soon set up a system to quickly wash off used cutters and have them in an area to cut more. 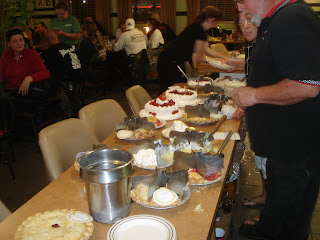 I jumped in and grabbed an order to fill it and put the order down on the end of the counter. As I dished up the pies, set them in a spot where they could be distributed and came back to the order form to finish the order, I found another problem. The waitstaff were all putting their tickets down in different places. Three or four tickets were now sitting on the one that I was filling. I grabbed up all of the tickets and placed them in a stack that we could work off of, yelling out compliance orders to the wait staff as they come up....I said yelled only because that was the only way anyone could hear anything above the din of all those happy riders.

Grabbing a pie cutter from the heated pot of water, I looked at my list and found a Strawberry Rhubarb pie ordered. We had made those special for the event and it looked to be the first one ordered. I grabbed a fresh pie and pushed the cutter down into it. Standing right next to me, Jim was doing the same to another fresh pie. And, as you probably already figured out, two Strawberry Rhubarb pies were cut at the same time. I looked over at his with probably a confused look on my face as Jim broke out in a belly laugh.

Pie after Pie was cut and served creating quiet a mess on the counter from dripping fruit and plops of cream. We all tried to wipe as we worked but the sheer volume created the blended mess on the counter that at times ended up on the bottom of a plate. Mistakes seemed to be covered by other orders coming in and as quickly as it all started, the last order came in and it was over. I loaded up cut pies into the pie case behind the counter while Kevin, our cook who had secured the line and had finished his clean up, loaded the full pies into the case at the register.

I ran coffee around the floor while Judy and Jim cleaned up the mess that we had made on the counter. Everyone on the floor seemed to be happy and jolly, enjoying their deserts and their company. The roar outside told me that the band was beginning to break up and head out to their respective motels. We looked up at the clock and it had not even reached ten. We had served eighty or so hungry bikers and cleaned up in less than an hour. I ran into 'Ten Dollar Dave' as he was leaving and he promised to bring in his family for me to breakfast one of these mornings. I asked him to make sure to ask for me as I wanted to meet them and he agreed.

Jim, Judy, and I left the crew to finish up their clean up for the night and headed home. Jim and I were going to get up early the next morning as a few of the bikers were planning on coming in for breakfast. I arrived around seven or so on Saturday morning to see that the group of leaders had arrived for their breakfast and meeting. Soon after bike after bike rolled back up. The diner soon filled up the front room with hungry bikers. Many who had gone to their motels instead of dessert the night before were now joining their compatriots for breakfast.

Jim jumped in the kitchen to help Ted while I assisted the short staff on the floor. I was amazed and amused by how well the short crew stepped in for one another with Sandy, prep and baking, coming up on the line and jumping in on the toaster and Trin who was in the cashier station helping sit while I tried keeping up with the busing and sorting out orders.

More groups showed up and we let them into the back room overflow. Casey, who was on the counter, was to take them but his section filled up so fast that he was struggling to do so. As I took menus to them, one man asked me if he could have some water. I smiled and said 'sure' but knew that it might be a bit before he was gotten to. I then spied the pass bar was full of food, so I jumped in their to begin sorting out the various orders so that the wait staff could just grab and run. I looked over at the wait station in the middle and saw the same man pouring himself a glass of water. I smiled at him and he smiled back. "I'm sorry, I was parched from my ride and needed that.". "No worries, ", I replied, "I was just happy that you understood and handled the problem yourself without getting angry with us.".

Terry, the back room waitress showed up early and I quickly ushered her into her station. The bussers and greeters soon showed up also and now fully staffed, we could handle anything that came in front of us. The normal Saturday morning rush came and went in what seemed like minutes but was actually a few hours and before we knew it, it was time for the bussers to secure the back room and clean up.