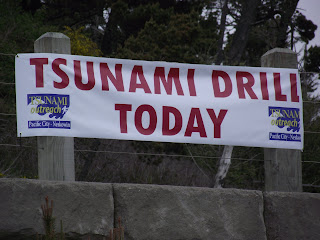 On the second day, we all ended up getting up a little late. The day did not seem as nice as the day before but we decided to take a drive north to Pacific City. Judy had a walk that her and I had taken in January and wanted to show the kids.

We jumped in the car, stopped for coffee, and then headed up on 101. As we got closer to Pacific City, we noticed quite a few emergency vehicles and began to wonder if something special was going on. As we turned into the road to the town, we noticed signs along the road that stated what was happening. Today was the day for a Tsunami drill. That word has struck fear ever since the Japanese earthquake and especially Trinity was not real happy about what was happening. She said she worried too much about it already.

When we arrived at the Pelican Pub, there was media everywhere. TV, radio, and newspaper were everywhere. We parked next to the beach and I went back and talked to the Oregonian crew. They said the drill had already finished. I asked how it went and was told it was kind of non eventful. They told of a small plane who flew over warning people that you really could not hear. As we spoke, the plane came over again, announcing the drill. As the news crew had said, unless you knew what they were saying, you might get confused by it all. 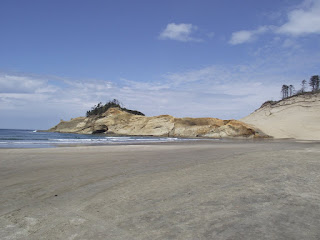 It was early and we wanted to work up an appetite for lunch so we took the kids off down the beach towards the head just north of town. There was a path that ran up the side of the sandy knoll. As we began up the path, it reminded me of the last part of the trail to the South Sister. The sand was so soft that every step forward was greeted with a slip back of a half step. 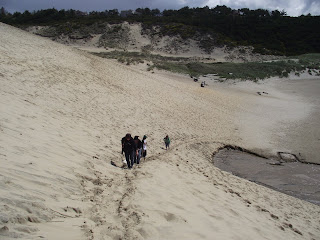 With my head down and a yoga like slow breathing, I stepped foot over foot until I had reached the top of the steep path. I then turned around to look at the sight below. First I saw the rest of the family getting the same workout that I had just received. Below them was the flat beach that was lined with trucks and trailers waiting for their respective dory boats to return. Beyond that was the Pelican Pub and the town behind it. The waves out from the pub were dotted with the small bodies of the surfers who were waiting for that just right wave to catch.

We walked the path that lead us to an overlook of a small cove that had crashing waves coming in. It is so hard to truly explain the total experience that we had there. There was so many variables of both sight, sound, and feel. The sun was bright with the warmth of the back of our necks. Out in the bay, was the lead buoy that led the boats back into the harbor. It was letting out a low moaning mournful wail as the fog alarm seemed to be still warning people of it's presence. 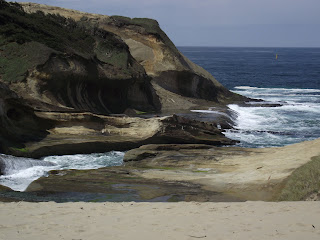 The waves lined up to come in the small bay and you could hear them crashing into the reducing sides of the small inlet. The crashes culminated in a large low bass 'Woomf" as the waves crashed into the end of a cave that the waves were creating in the side of the hill. As the waves bounced back out of the cave, additional smaller crashes were carving a slice into the the hard sandy ground, creating a crack that threatened to separate the ground below. We stood in awe for a few minutes as we took in the beautiful scene below that Judy had been so anxious to share to the kids. 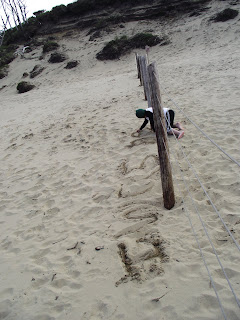 We then walked a little north to another area on the north side of the point. Jay and I joked with the girls trying to get them to take a picture of us attempting to walk out past the sign that said, do not go beyond this sign. Jay then wrote in the sand beyond the fence to let people know that he had been there. 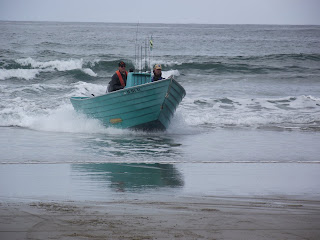 We then walked back down the same hill to the beach and back towards the pub for lunch. I turned to take a picture of the rock and when I looked into the view finder of the camera, it is filled with the full image of a dory boat headed right at me. I moved to the side and took pictures as it leapt along the waves and ended up sliding along the beach to a stop. We watched as the fisherman jumped out and coaxed it onto the back of their trailer. 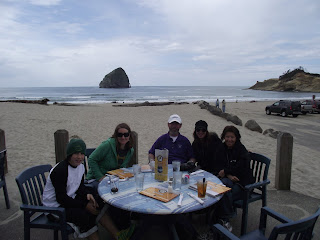 We then walked back to the pub and found us a table out on the deck overlooking the ocean and the surfers. As we studied the menu, we also watched the surfers as they came and went and enjoyed themselves in the waves. Some caught the waves just right while others crashed ugly seconds later. I don't think that I have seen this many surfers since watching them in Southern California. 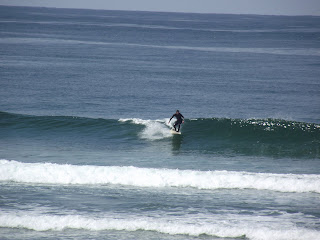 We enjoyed the beautiful day and the great atmosphere until the clouds began to roll in and the rain chased us inside to finish our meals there. We had expected to take part of our lunch back to the house for supper but....it was so good, that before we realized it, none of us had anything left. We then drove back to the house that Carrie and Jay could get packed up for their trip back home. 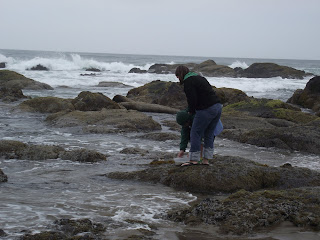 Jay needed to return his crabs to their homes in the rocks and the rest of us wanted to drive down to Depot Bay to see if we could see any more whales. We followed Carrie and Jay to the rocks and witnessed the return of the crabs and then said our goodbyes as they headed inland.

We drove to Depot Bay and watched as a small whale boat cruised to an area where a small whale was swimming around. As we watched and tried to get the right shot, I received the call that my friend, Gene, was no longer with us. They had contacted the diner to ask if they could use the back room on Friday for a service. I quickly agreed to this incredible honor. 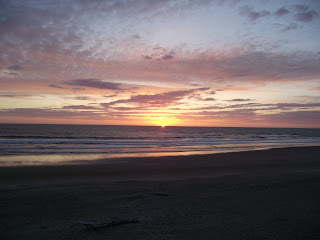 We then drove back to the house where we once again enjoyed the beauty of yet another clear beach sunset. Our beautiful time at the beach was being punctuated by the explanation point of the view in front of us. As I took shots of the glowing ball as it dropped from the sky, I noticed others standing out on their decks, documenting this same awesome sight.

Our last day had ended and we would be packing up and going home the next morning.